We had our breakfast the second day in our Hotel. It was a very standard breakfast with stuffs like Toasts, Fried rice, Fried Kuey Teow, Porridge.. etc. Well, I enjoy the porridge very much 😀 I love anchovies…hmm I love fish, I’m a cat. 😛

We were hoping to try some Thai breakfast but there’s only one Thai dish available, a dish called Southern Thai Rice thingy. If not mistaken it’s called Kohb-Ku-Krab but

the bad thing was I need to prepare the dish myself and I don’t even have an idea how. :/

Good thing there was this Thai girl preparing one for herself, so I stood behind her and try to learn a little……

Then, suddenly the Thai girl turned around and gave me hers instead..

So here, a plate of Kohb-Ku-Krab..

Too bad, I didn’t like the dish very much. It’s very grassy and I’m a carnivore but i did try my best to eat as much as possible, just not to waste the Thai girl’s kindness.

After the breakfast, we grabbed our camera and met up with our driver. Yep, we got ourself a driver, thanks to Iska for it. The driver had planned everything for us, the place to visit and the place to eat. 😀 We just need to sit back and enjoy the ride. No more lurking aimlessly 😀

First stop, Hatyai Hill !! (not sure bout the actual name)

I think it’s the tallest highest hill in Hatyai, can view the whole Hatyai city from there.

(You may click the image for a bigger view)

And there are two temples on the hill, one at the hilltop of the hill and another one somewhere around the middle. 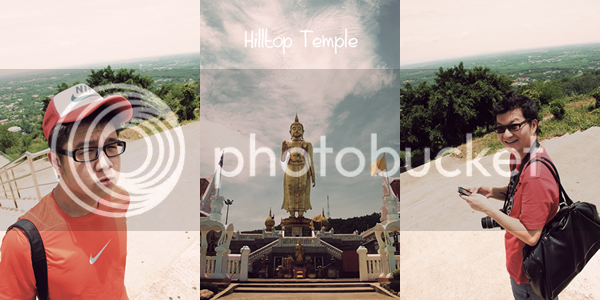 As it was burning hot, so we didn’t hang out too long. We took some photos of the place and leaving for Samila beach which is located in Songkhla, a province next to Hatyai.

About an hour of car ride later, we reached the beach. It was quite pretty, the sky was blue, the sea was green, the sand was very white and fine, but there were not much visitors around. We seems to be the only visitors there. Lol. Probably, it’s shadowed by the more popular beaches like Phuket and Krabi.

There were quite a number of stalls selling souvenirs and snacks, I bought a couple of souvenirs and a cup of fresh sea coconut juice. Super cheap, RM2 for the sea coconut and RM10 for 10 pcs of Mermaid statues but too bad I have no photos of anything from the Beach..

Here’s one that I snatched from Smashpop .. 😛

I was at the toilet and left my camera in the car and when I came back, the driver was no where to be seen.  🙁

The only photo I had from the beach is this..

A cup of coconut ice-cream with nuts, jellies, bread and glutinous rice I bought there. It’s very very nice!!

Then, the driver brought us to Songkhla Aquarium which is located just around the corner.

We went for our lunch after that. The driver brought us to this shop which doesn’t looks like a restaurant. In matter of fact, when we entered the shop, we actually saw a lots of dried fruits and seafood. :/At one moment there, I thought he brought us here to buy some souvenirs.@@

*Ahem* another photo stole from Smashpop 😛

Surprisingly, right behind the shop, there’re huts setup with tables and chairs. And we found out that the shop is actually right beside the sea and there’s even a fish village right next to it.

While waiting for the ordered food, we all went over to the village to have some photos.

Well except me… I did not joined them ^^”

After a while, our food arrived…

These were what we ordered, Green Curry, Steamed Fish and Sweet Sour Fish. It was good especially the fish, it was super fresh. Too bad, the food we ordered doesn’t seems to be Thai to me ^^”

But the next destination made it up, as we headed back to Hatyai, to the Floating market. Oh yeah!! Woohoo, local Thai food!!

And there’s this food I wanted to try for very long time.. 😀

Hohoho…as curios as a cat, I always wondered how it taste like. Now, I got to taste it finally!

Okay, I was kinda scared and decided to choose the smallest insects available. ^^”  If not mistaken, the bigger the insect is, the juicier it is and I don’t want insect juice!!

In the end, we bought ourselves a pack of Crickets + Mealworm + Pupa for RM2!!

The 3 smallest insect available. The 4th smallest looked too juicy for us.. ^^”

Now, we got our insects, the next thing to do was to taste it..

And since I’m the one most anticipated, I’m forced to taste it first.. T3T

Hahahha It was really tasteless. I took the cricket and there was no weird taste. Just crispy and peppery. The peppery taste was from the pepper the guy put in earlier.

Everyone took their turns to taste it 😀 Smashpop and SuperAdrian tried the cricket only while me and Iska went and tried the other 2 insects. The mealworm and the pupa.

The mealworm was tasteless too.. but the Pupa..

was bad. Seriously, it was very very weird. It was all powdery. @@ Ewww…

But luckily it was not juicy like grasshopper. I watched someone try it before on a food show. :/

Anyway, here’s a comparison of the three…

If you want to try, I would suggest you to try the crickets. Crispy!

After the appetizer, we headed further down the street to the floating market!! 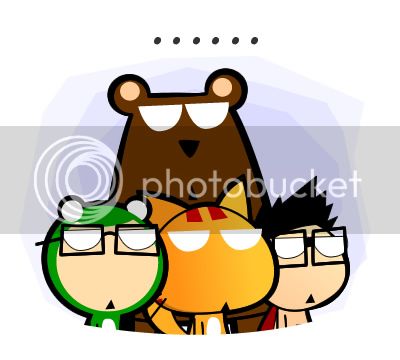 hoo? We were so disappointed. It wasn’t as big as we thought it would be (like the one in Bangkok).

I think there were only around 20 boats but neither less, I was still very excited to try Thai snacks.

The only 2 food I had in my camera.. Too busy eating 😛

Tried a couple of food, it was only so-so. Oh, be careful of the drinks, they are very very sweet.

But there’s this dessert called Red Pearl or Red Ruby something.

Oh, all the food and drinks there are served in either bamboo or clay bowls in the photos which you can bring them home with you and most the food there are sold at RM2 per bowl.

After the floating market, we went to our last destination, the Hatyai night market.

I think girls would love this place as there were many shops selling shoes, bags and clothes.

I in the other hand was more interested in the food but due to the fact that I’m still full from the lunch and tea break at floating market.. :/ I tried a couple of snacks that I never see before..

and to end the night..

Hehe…I have this habit of visiting the local mart or 7-11 whenever I’m in other countries. I will always purchase a handful of weird/different local snacks to try on.  The same goes to the local KFC and McDonald’s  😛

And that ends our night and the trip in Hatyai and we went back to Malaysia the next morning. It was a pleasant trip, my first trip to Thailand.

Thanks AirAsia for it and also my companions, Smashpop, SuperAdrian and Iska. Now let’s hope we can go travel again. 😛

##Sorry for the grammar##

Posted on May 15, 2011 by Jian Akiraceo. This entry was posted in Thailand, Trip and tagged Air Asia, Hatyai, Inaugural Flight, Iska, Smashpop, SuperAdrian. Bookmark the permalink.