You better watch out ..
You better not cry ..
Better not pout ..
I’m telling you why ..
Santa Claus is coming to town..

I have been waiting for so many years and he never came. 🙁 Maybe because I’m not a good cat?  Anyway, check out my new Christmas theme and wallpapers 😀

Counting down 12 more days to Christmas~~ Woohooo Oh if Santa really exist, what present will you wish to get?

P/S: Due to the cache in your browser (IE, Mozilla, Chrome), the new theme might not appear. You can either wait or clear your cache to view the new theme 🙂

Anyone here read local comics?? Please raise up your paw 😀

Two weeks ago, I was asked to cover for the 100% Gempak Starz (previously known as Malaysia Comic Carnival). It was a 3 days event from 26th – 28th November 2011 with lots of activities for the comic fans.

There was an artwork display from the finalists of 100% Creative Fever Multimedia Competition where contestant need to come up with their own version of animation/application/merchandise  ideas etc based on Gempak’s comics.

Here are some of the entries. 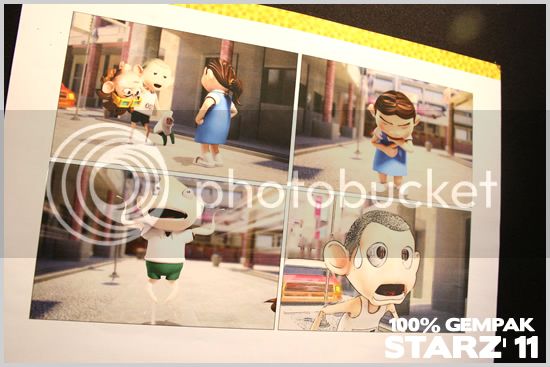 Luckily they did as I managed to buy one to complete my Lawak Kampus (Kuso High School) collection.

There’s a lot of people buying and I was given a number to wait for my turn.

While waiting for them to call my number, I walked around the area..

and got caught by this sweet promoter.

They were promoting this Chinese online game (which I forgot the name of) and telling how awesome and popular the game is etc.

I felt bad for them for wasting their energy and time in pursuing me as I don’t play Chinese language games and I already quit online gaming since the birth of Miao&WafuPafu. XD (err.. i quit a lot of stuffs for Miao&WafuPafu LOL)

Nevertheless, thanks to them for their time and to kill mine while waiting for my call. XD

Soon after that I went to redeem my comic book, I took a photo of the rest of the promoters on my way out.

After I took my book. I walked into this section of  awesomeness!!

A section of  special customized booth by our local comic artist!! Darn, they are so creative!!

Check out this Onsen styled booth. One of the most popular there. 😀

that comes with a peeking hole. Many people was lining up just to have a peek.

Don’t ask me what I saw in there. *cover face XD*

Ode of the Comic Artist. by Fakhrul Anour

See You there by Redcode

Ever Elite. by Zint!

This Is Where It Begins. by Little, Verzill, Veon & Wilson

The artist here is Wilson who was once an engineer and now he draws rabbit. 😀

The clothes on the wall is exchangeable :D. Oh, This is Neko.

And this is Peony!!

There were a couple of autograph session and each session three comic artists will sign for the fans. 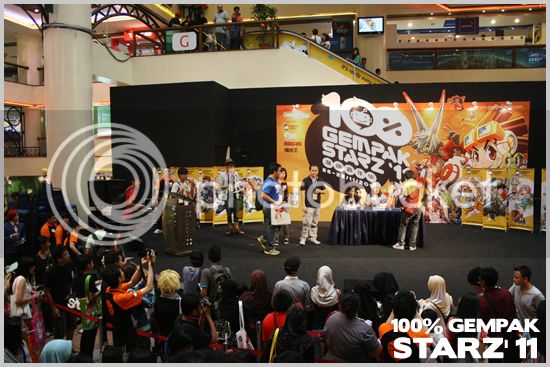 Hopefully, one day I also have a chance of having my own comic autograph session and there’s actually people and cats attending it. Oh wait, I need to come out with my own book before that. @@

The autograph session was long as the comic artists didn’t just sign the comics but..

While Neko, Jo and Keith was signing on the stage, the rest was interviewed at the booth.

There was also a cosplay competition held on that day. Some of the cosplayers were good!

Every time I saw people cosplaying, it reminds me of the very first cosplayer friends I had and met in Hong Kong. I miss them and Hong Kong too T_T

After that, Fakhrul Anour, the editor of Gempak gave an opening speech on the event, Gempak and also local comic industry.

And ended with a group photo of the comic artists from Art Square Group.

Oh, do support our local comic artist 😀 They’re really good!!  Too bad I wasn’t able to have some talks and interviews with the comic artists as I was kinda short of time. I having a short meetup with the other comic bloggers later that. 😀

It was a funny moment where the professionals comic artist at one side and us, the amateurs just right opposite at the KFC and some of us dreamed to be a comic artists. XD

Anyway, that ends my cover of the event. Hope I get the chance to attend the event again.

Oh before I go, have a Great Caturday night all!!!

A No is a No.
Miao Can Haz Discount
Buddha has Anger, so do Miao.

It happened the other day before we leave the hotel. Some how, my friends are turning into “Aunties”  taking all the entitled items that we didn’t manage to use..

It seems like people eventually turned into “Auntieness” as time goes by.. XD

I think I’m starting to become one too. @@

Anyone here do this too?

Miao try to save money.
Where's the Manners?
Driving in Penang