Time to travel again with Miao! This time we are going to…

ChengDu, the capital of Sichuan province.

I visited Chengdu last month and it was more awesome than I expected. I went to Guangzhou before and I didn’t like it but Chengdu is totally different. You know I’m a sucker for architecture. And this city has it all from hundreds to thousand years old buildings. <3

Check out this random building by the road side.

Anyway, here’s a list of where I went to in ChengDu city on first day which I think is a must visit if you’re in ChengDu.

Chengdu is the homeland of Panda. So, how can you go to Chengdu without visiting them.

Remember to wear a comfortable shoes when you come here as this place is huge. The pandas have their own bungalows with an air-conditioned room and a big green yard. And it’s like 5 minutes from one viewing spot to another. There are two types of Panda to look at; the famous Giant Kungfu Panda and the Red Panda (which biologically not a panda).

Later that, we found out that the weather was too hot, so all the Pandas were hiding inside the aircon room.

But damn, they looks so fluffy. I heard that you can hug with a payment of few hundreds USD.

Wuhou Temple or Wuhou Memorial Temple is actually memorial site dedicated to Zhu Ge Liang (181-234 AD), he was the minister and military strategist for Emperor Liu Bei (161-223 AD). If you know the history of the Three Kingdom, then you would know who they are. The site is also dedicated to Emperor Liu Bei where his graveyard is in this site.

The interesting part of this site is that it was built during the Qing dynasty in 1672 and the place is well maintained until now.

These are all statues of the ministers and generals of Emperor Liu Bei.

Somehow, walking through the big-garden-liked site is like walking into the past. Just imagine, the Qing Emperor and minister once walked the same tiles and path you walk on.

Located just next to the temple is the an old pedestrian street built in the Qing Dynasty. In 2004, it was renovated into a food street and now opened to the public.

Although it’s a little touristy but I really enjoyed all the old architecture buildings. It can be a good spot to take some hipster shot but…

There are two parts to the street food, the first part was filled with bars, cafes and restaurant and at the end of the street are all small shops selling many Chengdu street food.

I didn’t tried much as I was still full and we were heading for a steamboat dinner soon after that but I did tried this as it was highly recommended.

Pineapple sticky rice, it’s not as good as mango sticky rice to be honest. 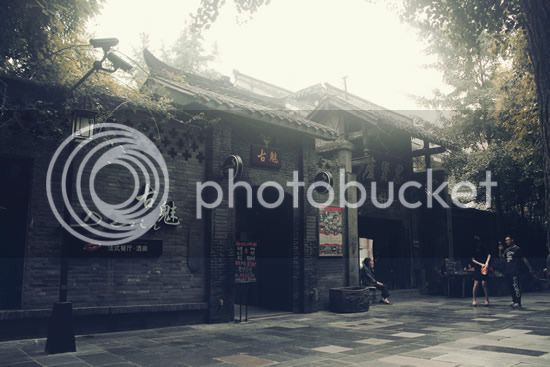 Jinli is not the only ancient street in Chengdu, the other one is the Wide and Narrow Streets which can traced back all the way to Qing Dynasty too. 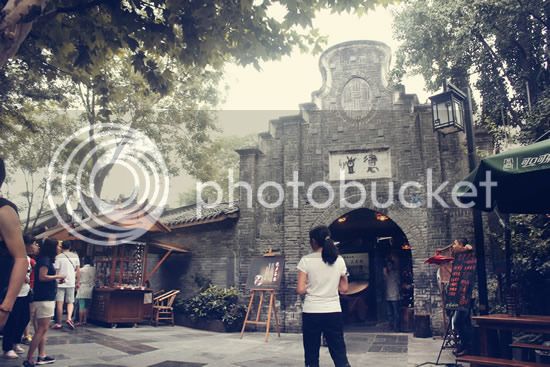 So pretty, right? I just love how they kept all the old buildings and turned them into a commercial street and not let them gone wasted or destroyed. If you love taking photos of buildings, you should come here early in the morning before the shops open. Once it opens, the place will be flooded with people.

I actually went there twice XD Once in the day and another time at night.

It looks even amazing at night.

Check out this Starbucks Coffee.  Why we don’t have a longhouse styled Starbucks here? T3T

This one looks so much like a scene from a movie hahaha.

And yes, it’s still crowded at night too. XD

After out since 8am in the morning, we were finally back at hotel. We stayed at Dorsett Grand in Chengdu. It’s great place to stay as it is strategically located right in the middle of the city.

It will even better later when the new metro station right in front of the hotel finishes in a couple of months.

It feels great when the hotel staff warmly welcomes you whenever you’re back. ^ v ^

And this is my room~ So comfy~~

Just what I need after a long tired day, fresh juicy fruits~ They even drop a welcome notes with some tourist information. Sometimes, it’s this small heart warming thing that hotel does that makes the difference.

For more information, feel free to check Dorsett Hotels, they have hotels all over Asia region and UK.

If you like Pandas and ancient buildings and streets, hope to AirAsia site now and book your ticket. XD

Posted on July 16, 2015 by Jian Akiraceo. This entry was posted in China, Trip. Bookmark the permalink.