After that, we reached my friend’s pintu. Longhouse are divided into Family rooms called Pintu(door), one door is for a family.

First thing I noticed upon arriving is that everyone here speaks Iban language. Abuden. :|They do speak Sarawak Malay/Sarawak language or even English for some but with heavy Iban slang in it. I can hardly understand too.

Most of the time, I have no idea what they are talking about. All I did was smile. XD

I did picked up a couple of words like.

Lol most of the words are related with what I did over there. Food, Bath & scolding PA. LOL

The longhouse we stayed are really very isolated, due to the little amount of people who stay around this area, no basic utilities are provided here as it is not profitable to do so.

My PA has warned me about this and asked me to prepare entertainment of my own for these few day. Actually, I wasn’t the only city cat there, the PA’s brother has not been visiting the longhouse for almost 10 years. So he too are not used to it.

The first thing he did when he arrived was… 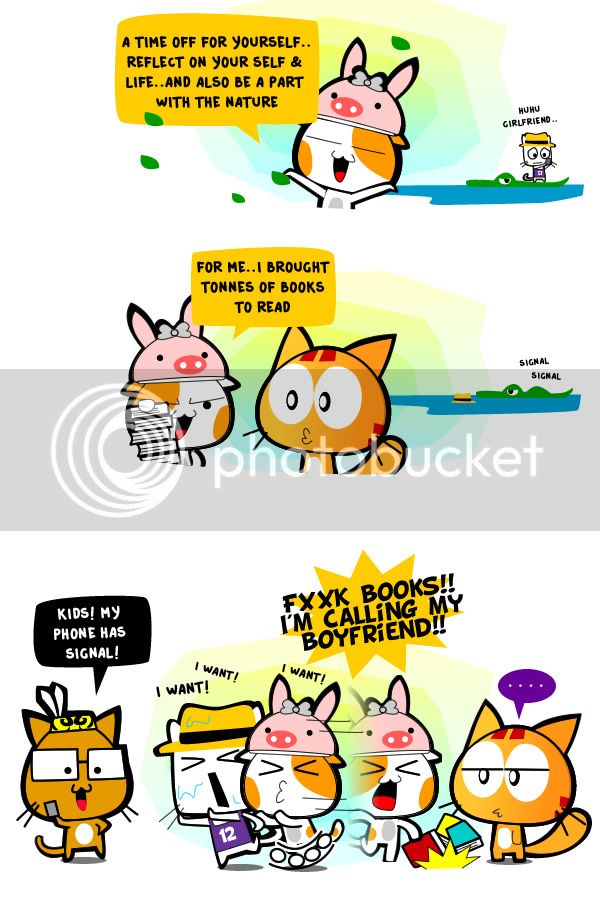 PA Papa also offered me his phone but…

PA papa~~ Why you kept pouring cold water on me. T3T *i iz foreveralone cat*

Seriously, I was having a bad luck, one of the family is having a wedding dinner back in the cat city during Gawai, hence most of the families are not coming back longhouse for Gawai. 🙁

Beside that, the solar battery to our Pintu was spoiled. 😐 So the laptop I brought with me is just a piece of useless metal there. GG.com.

Lucky, I had my camera with me. So I went around and took so photos..

The Verandah where everyone hangouts because it’s freaking hot in the Pintu.

The bags you seeing in the photo are all Rice. There are so many rice that you can eat for months to year. As the storage hut is under renovation, hence they kept all the rice at the Verandah.

Le inside of the Pintu.

The traditional longhouse. No partition, no rooms, one big room for all. Living room, bedroom, kitchen, dining room in one, 4 in one combo XD. Because the kitchen is in the same room, the room is usually very hot when they are preparing food.

The source of heat in the room. Our traditional old school stove. XD Cooking food the old school way because gas stove is too mainstream. hahaha

What I’m seeing next is the most shocking part of the room.

For unknown reason, I feel insecure..

A No is a No.
Coffee and Miao
Story from Malaysian Borneo's side

Here’s the photo of it which I forgot to post.

It’s my first time to encountered a crocodile in the wild. 😐

Pretty exciting lor. We actually managed to spot almost 5-6 of them on our way out few days later.

Due to heavy deforestation, there are lots of floating logs on the river. It would be scary if we accidentally ran into one, flip the boat or sank the boat into the crocodile infested river. OAO

So to avoid this to happen, one who is experienced is needed to sit in the first seat and guide the boat. So…

Seriously, that flying thing really came in my mind. what the meow. I have no idea what my brain is thinking.

After the 2 hours boat ride, we finally reached the jetty to the long house.

I heard from PA’s Papa, the water here used to be crystal clear, and when he was small, he used to swim in the river with all his relatives but now it’s all muddy that he don’t even dare dip his legs in it.

It took only 5 minutes walk from the jetty to the longhouse.

TADA!! this is the longhouse.

There are many kinds of long house.

The Run Down one (foreveralone left behind), similar with the Old School having no or limited basic utilities but without much maintenance and renovation due to low occupancy.

The one I went is the the run down one where only 2-3 out of the 27-29 families stay there, the rest only went back during the Gawai, so it was pretty run down, it is a very old longhouse, dated more than 80 years or even much more.

The Iban traditional longhouse mainly are made out of wood and located near the river. In oppose to the Bidayuh‘s longhouse which have more bamboo as material, located on hills and comes with a baruk (round building); and the Ulu‘s longhouse which is larger in size located on highlands and always covered with mural drawing of tree of life.

This longhouse comes with solar panels batteries. It’s not much but sufficient for light activities usage .

Open Verandah where people rise their rice, crops, laundry etc. And that’s a new house trying to be anti social and separating from the main longhouse. XD

Another new house separating itself from the longhouse.

And here we are 😀 The staircase to the the Ruai (verendah) and also to my PA family’s pintu (house room).

It was my first time visiting a real longhouse (mock, or tourism’ed longhouse not included). I always wanted to visit a real and traditional longhouse. I’m a big fan of culture thingy like folktale, legends, taboos etc. I always find them interesting.

So the most looking forward thing in this trip is…

So i was so excited and can’t wait to meet the first villager!!

And just within a few minutes, I managed to meet a village…

It was a shocking experience..

At last I reached the small town of Pantu.

It is really a super small town with one row of shops, a school and a couple of authority buildings.

Before we depart our way to the jetty, they asked me to go buy a flip flop as the water might get in the boat (what the meow?!) and the ride might get a little wet.

And so, I went to this small grocery shop and encountered this…

The boss from this place is soooo honest, he didn’t want to “cheat” my 20 cents where the lady boss insist to hike the price up for the city cat me. 😐 then, he secretly pass me the 20 cents and asked me to faster leave the shop. LOL

After that, we took a few minutes walk to the jetty..

Before embarked the journey, PA’s Papa told me about this custom the Iban people used to have..

Sometimes, I wonder why do I hire her.. LOL

Gosh the boat was super small (slim to be exact). Can only fit a person and it swings when it’s not moving. Feel like it’s gonna turn over anytime. XD Scary shit.

PA’s Papa told me a taboo while on the boat…

My Wafu Pafu still never stop trying to kill me.

The ride was alright. I was expecting to going through thick forest but logging was serious. PA’s Papa told us that in the old days, one cannot view the mountains or much of the sky with the thick tall forest but now….sigh..

Coming up next: Flying boat?!

What I Hate About Christmas?
PapaMiao has changed!
Contest: Miao Ang Pow Set